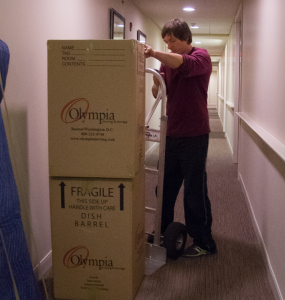 It’s not uncommon that Olympia Moving & Storage has to provide a Certificate of Insurance (COI) for our clients’ moves. But what exactly is a certificate of insurance, and do you need one for your move?

Do I need a Certificate of Insurance?

This is a document that usually applies to moves in an urban city, so it comes up a lot in our hometowns of Boston, MA and Washington, DC. If you are moving in or out of an apartment building, high rise, or a property with building managers, there’s a good chance that the managers of the property require a certificate of insurance for any moving company that works on the premises. Simply ask your building’s management if this is a document they require from moving companies, and don’t forget to ask the management of the property you’re moving into as well!

What exactly is a Certificate of Insurance?

How do I get a Certificate of Insurance from Olympia Moving & Storage?

All you have to do is ask! Your sales rep or moving coordinator will ask for the contact information for your building management. We’ll coordinate directly with them, and you don’t have to worry about a thing! Basically, Olympia needs to ask the building management for their fax number, the certificate holder and certificate holder address, and the additionally insured that the building wants on the document. Olympia then asks our insurance company to produce a Certificate of Insurance with this information and the insurance company faxes it over to your building’s management.

What happens if I don’t request a necessary certificate of insurance when I book my move?

You should always ask your building management whether a moving company certificate of insurance is needed at least several days before the move. Ideally, Olympia should know whether a certificate of insurance is needed at the time of booking, that way they can square away all your move details right away, and you’ll have nothing to worry about leading up to move day!

If Olympia is not made aware that a certificate of insurance is necessary, the consequences can be costly. The crew may show up on move day and your building management will not let us in! The crew then has to wait around for the building, moving company, and insurance company to sort out the certificate of insurance so they can come inside and begin the work. Not only does this delay your move, but all this wasted time is included in the crew’s chargeable hours, which are charged to you.

It was an exciting weekend for athletes around the state as team Olympia pitched in to help with the Special Olympics Massachusetts Summer Games logistics. Our team, comprised of volunteers from the office and our crew, were kept busy performing free services for Special Olympics. Even company president, Michael Gilmartin, and VP of sales, Piet Gauchat, gave up their weekends to run the on-call logistics truck for the event. Olympia helped with every facet of the event’s logistics, including:

Matt Ruxton, Vice President of Sports for Special Olympics Massachusetts, said: “I wanted to say thank you for all that you did to make this past weekend such a success. It truly was a great weekend and we could not do it without your help. You guys are the ones who make the event possible and all the success is due to your hard work. ”

One of the local program directs said: “This was the most efficient / well run weekend during my 7 yrs. The check-in, buses, staging, awards, etc. all went well. overall a great weekend. Great job!”

Here are some pictures from the event. You can see more pictures in our Facebook album.

Read our official press release about our involvement.

We can’t wait to continue to help out Special Olympics Massachusetts the rest of the years as their official logistics sponsor! Learn more about this partnership at olympiamoving.com/specialolympics Read the Press Release on the Boston Globe website

Olympia Moving & Storage, a premier Boston area relocation company, will be the official logistics sponsor of the Special Olympics Massachusetts Summer Games. This is the second year Olympia will be donating their services free of charge to the non-profit organization.

Summer Games is taking place the weekend of June 6 – 8, 2014 at the Harvard University Athletic Complex and at Boston University. Over 1,900 athletes with intellectual disabilities from around the state will be competing in 6 sports, including track and field and aquatics. As one of Special Olympics Massachusetts’s largest events, Summer Games showcases the abilities of these athletes and encourages healthier lives in their communities.

Olympia Moving will be doing the heavy lifting of transferring the equipment needed for the weekend’s sports and social events, as well as the much-anticipated Opening Ceremony at Boston University.

Employees from Olympia Moving are volunteering their time to welcome the arriving athletes to the games and move them into their dorms at Boston University. The relocation company will also assist with closing the event.

“The Special Olympics Massachusetts team has been great to work with over the past year,” says Michael Gilmartin, President of Olympia Moving & Storage. “It’s been especially valuable to see our Olympia Moving team work directly with these athletes and be inspired by their joy and determination.”

Mary Beth McMahon, President of Special Olympics Massachusetts, is looking forward to Olympia’s continued support of the Summer Games. “We rely so heavily on volunteers in every aspect and the work Olympia did helping our coaches with the move in and move out and helping our Games Management Team work more efficiently and effectively with logistics is really priceless.”

Olympia’s support of Summer Games is part of their year-round sponsorship of Special Olympics Massachusetts. The moving company is entering their second year of this partnership. Last year, Olympia Moving & Storage contributed almost $50,000 in monetary and in-kind donations to Special Olympics. To learn more about Olympia’s sponsorship, visit http://www.olympiamoving.com/specialolympics

About Olympia Moving & Storage:
Olympia Moving & Storage is a full-service moving company in Boston, Massachusetts and Washington, DC. Since its inception in 1993, Olympia has built an unparalleled reputation for delivering exceptional local moving, interstate moving and international moving services. In addition to residential moves, Olympia offers specialized services for companies preparing for an office move. Olympia Moving is the preferred mover for numerous universities, law firms and real estate organizations. Our commitment to excellence is reflected in our 85% customer referral rate and our numerous awards. For more information, visit http://www.olympiamoving.com or call 800-222-4744.