Olympia had a great time on Sunday showing off our moving truck to the kids at the Touch-a-Truck Newton event, put on by The Newton Partnership. The event included 39 different trucks for the kids to explore. Crew member Charles & sales rep Frank brought one of our crew cab straight trucks to the event. The kids had a great time honking the horn, exploring the trailer, and running up & down the ramp!

Check out the pictures of the event below, and click here to see pictures from a previous Touch a Truck event.

If you’re hosting an upcoming Touch a Truck event, e-mail Rachael if you’re interested in bringing a moving truck to your event.

The Right Olympia Moving Truck for your Relocation

On Saturday the Olympia Moving & Storage Virginia branch came together for a great purpose: to pull a plane to support Special Olympics Virginia.

Team Olympia pulled a 164K lbs airplane to raise money for athletes with intellectual disabilities. Their pull time clocked in at 7.01 seconds.

Olympia Moving & Storage is an official sponsor of the Dulles Day Plane Pull. We provided free logistics support for the event including receiving and delivery services for supplies and event set-up and break down.

Says Ellen Head, Director of Development for Special Olympics Virginia: “Thank you! The guys are GREAT! Victor and Adrian are the absolute best. We are packed and event READY!”

Olympia also exhibited at the event, which saw 30,000 attendees and participation from 70 teams. It was a great day to raise money and bring awareness to the wonderful programs Special Olympics provides for children and adults with intellectual disabilities and their families.

Special thanks to the following who contributed to our fundraising campaign:

Check out the pictures and video from the event below! We can’t wait to beat our pull time in 2015!

They carry sofas and pianos all day long, but on September 20th the Olympia Moving & Storage crew will prove that they’re the strongest around – and raise money for a terrific cause.

Olympia placed 9th out of 66 teams last year. This year, we are in it to win it! Check out the video of our 2013 Plane Pull

We would greatly appreciate your help raising money to provide programs for athletes with intellectual disabilities.

Plane Pull is also a great family event; and includes car shows, aircraft displays and a kids zone. Come see Team Olympia pull the plane: Saturday, September 20th, 11 AM – 4 PM, Dulles Airport. In addition to our fundraising, we are also donating logistics support for the event and exhibiting one of our trucks.

Every donation helps! Thank you for your support of Special Olympics Virginia!

We’ve made it through yet another Allston Christmas – the infamous Boston moving day when 79% of rentals turn over. It was a very eventful September 1st for Olympia Moving as we finished busiest month to date. Our crews were in the midst of the Boston moving chaos, moving hundreds of clients in all the most hectic neighborhoods, including Allston and Brighton.

One highlight of this Boston tradition are the funny tweets and photos posted by Boston residents. This year’s local social media didn’t disappoint. Olympia compiled dozens of the best Tweets and Instagrams here: According to Metro Boston, action from the city helped make this year’s Boston Moving Day a little smoother. The city issued 120 violations and 21 tickets for unsafe and unsanitary units, 1100 code enforcement tickets, 120 bed bug notices, and picked up 190 tons of trash.

Mayor Walsh held a press conference on the scene about cracking down on the unsuitable conditions of many of the rentals that are the new homes of the moving residents.

The Boston Globe perfectly encapsulated the moving madness in this video. BostInno theorizes that Allston Christmas could soon be a moving event of the past due to rising rental prices in Boston and Harvard’s expansion into Allston. However, the heatmap they posted via realtor Bryon Wells shows that the move-in volume is still strong. 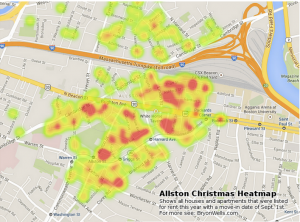 Boston.com dug up some throwback photos from Allston Chrismas’s past, proving that some things never change. The Allston Xmas webseries also premiered their first episode yesterday, and they have 11 more to come. The first episode features a hilarious sofa moving scene that anyone who’s ever moved can relate to. Catch Olympia Moving in the credits, we gave them a hand with the sound mixing.

We hope your September 1st move was a successful one! If not, remember that the easiest way to move during Allston Christmas is with Olympia Moving & Storage!

“The movers did an absolutely terrific job. They were extremely professional and really took extreme care in everything they did. A perfect job completed during the busiest moving weekend of the year and a very hot one as well.
Thank you very much!!” – S.K. who hired Olympia to move both her son and daughter in Boston, MA 8/31 and 9/01

Allston Christmas has come and gone, but our memories of this year’s Boston Moving Day will stay with us via the Instagrams Boston residents shared from the scene. From the piles of trash, to the weird finds, to the traffic, we compiled the best Instagram pictures from Allston Christmas 2014. If you’re currently suffering through unpacking, just take a moment to be thankful that this wasn’t your moving experience! 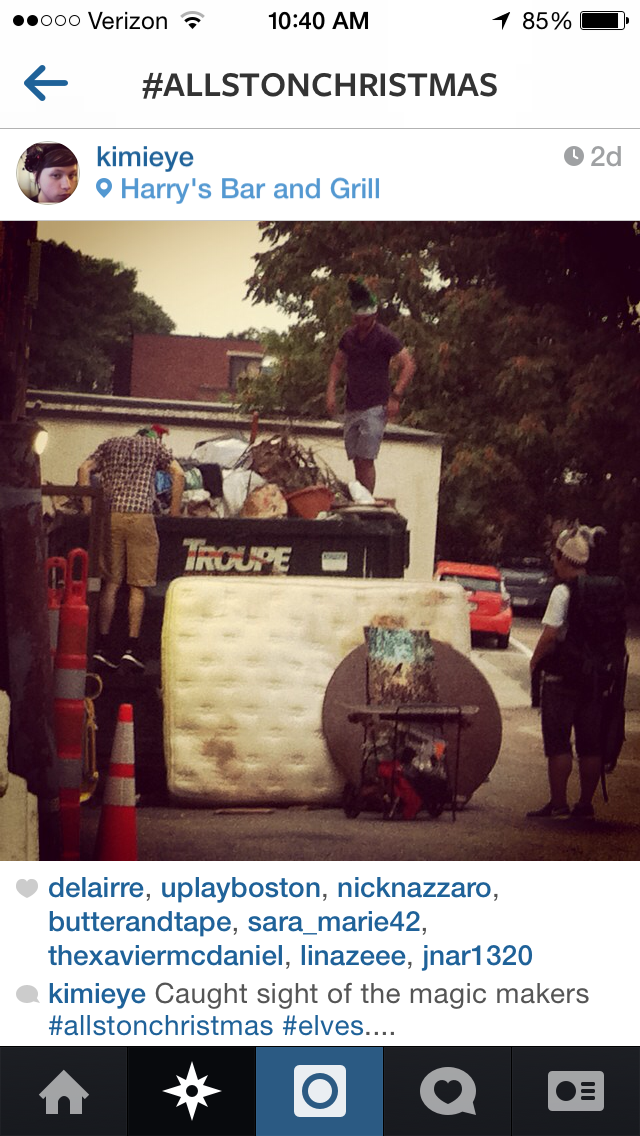 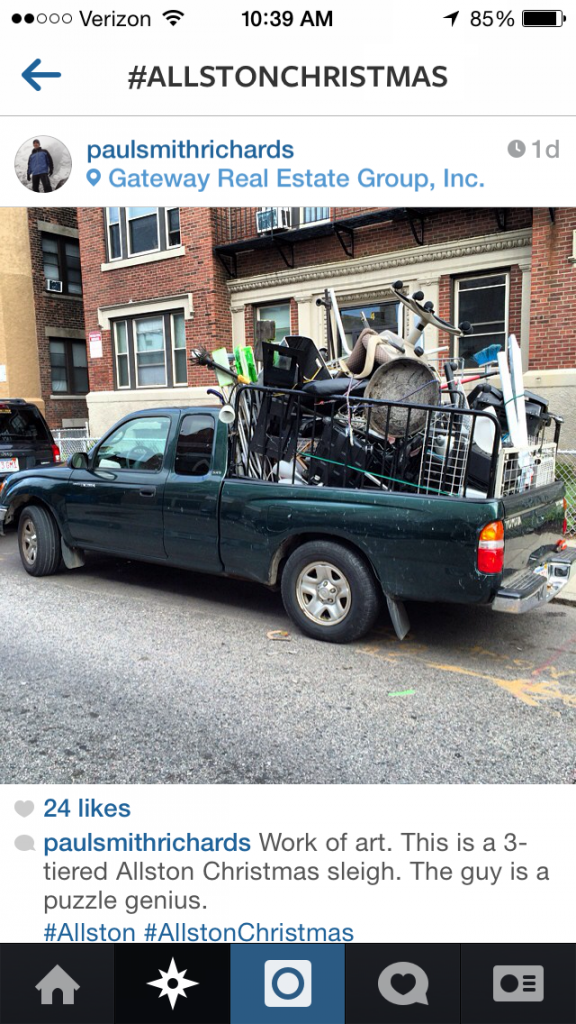 We’re guessing these moves would have gone smoother if this was the picture in front of your house on moving day:

The city of Boston has survived yet another Allston Christmas. This unofficial holiday is definitely best enjoyed at home, enjoying the tweets from the miserable folks on the scene.

Boston does what they do best and livetweeted the moveageddon. We rounded up the best tweets from Allston Christmas 2014. Thanks for making us laugh Boston! Until next year!

#AllstonChristmas, where the brightest college students in the world innovate mattress transportation. pic.twitter.com/lV671OTVlR

Car w/ 4 passengers, each using a hand to hold a mattress on the roof while they drive. #AllstonChristmas

Guys, I think we have a winner for #AllstonChristmas 2014. What a payday. pic.twitter.com/rIe4W41IhN