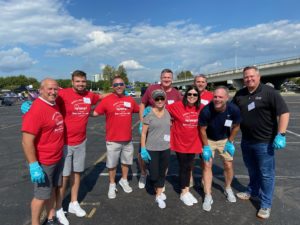 Special Olympics provides year-round sports training, athletic competition and other health-related programming for athletes with intellectual disabilities. The power and joy of sport shifts the focus to what Special Olympics athletes can do, not what they can’t. Attention to disabilities fades away, and we see talents and abilities, and applaud them for all that they can do.

We like to involve our customers and stakeholders in the causes that are important to us.

Thank you for your generosity. Olympia Moving & Storage is proud to sponsor Special Olympics athlete, Amanda Church, and her trip to the 2015 World Games in Los Angeles, CA.  Special Olympics World Games begins on July 25th and will feature over 7,000 athletes from 177 countries.  It is the largest sports event in the world in 2015. Amanda will be representing Massachusetts and the United States in the aquatics events.

Amanda has been competing with Special Olympics since 1998 in aquatics, basketball, and flag football.  She has won numerous gold medals and was inducted in the Special Olympics Massachusetts Hall of Fame in 2012.  Amanda is also a Global Messenger for Special Olympics and speaks at fundraising events and with the media.  In addition to her work as an intern for Special Olympics for 8 years, she has also worked as a law firm receptionist for 5 years.  She lives independently at the LIFE Program in Mashpee, MA.

Olympia Moving & Storage has been inspired by Amanda’s many accomplishments. She truly exemplifies that by focusing on abilities instead of disabilities, people can amaze and exceed expectations in both athletics and life.  Her family has also moved 8 times with Olympia’s executive moving brand: Clark & Reid!  Olympia Moving & Storage is proud to sponsor Special Olympics World Games athlete Amanda Church with a $5,000 donation towards her training and travel expenses for this once-in-a-lifetime event.  You can stay up to date with Amanda’s training and progress on our Facebook page.  Congratulations, Amanda, on your achievements with Special Olympics, and we look forward to watching your success at World Games!