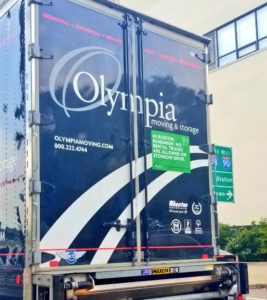 As another September 1st Boston Move In Day (a.k.a. Allston Christmas) comes to an end, the team at Olympia Moving & Storage is taking a collective sigh of relief. While today, when 79% of Boston’s leases turn over, means moving chaos for the city, for moving companies Labor Day weekend marks the end of the high volume summer season. We anticipate continuing our hard work through the rest of the year, but Olympia Moving & Storage is looking forward to a moment of R&R after working at capacity all summer!

Meanwhile, the rest of Boston is not used to moving being an integral part of their daily lives, and took to Twitter and Instagram this week to complain, meme, and post their curbside finds. Although a weekend of gridlocked moving trucks is annoying, the results are certainly entertaining!

There were big messes

And I heard them exclaim as they drove out of sight “Merry Allston Christmas to all, and to all a good night!” #allstonchristmas

It’s beginning to look a lot like #AllstonChristmas in Beacon Hill. Oh what fun it is to jump from junk pile to junk pile to get to work.🎄 pic.twitter.com/NsR5snPoZe

#allstonchristmas or the barricade from Les Mis?

Merry Allston Christmas to You & Yours: 👉To those on the hunt: May your finds be without bed bugs. 👉To those trying to navigate: Pack your patience 👉To those moving: Godspeed & for the love…keep your moving truck off Storrow ❤️ : : : #allstonchristmas #movingday #boston #september1 #bostonrealestate #bostonmovedotcom #aandsrealty #realestate

A post shared by Valerie Filiberto (@realtimerealestateboston) on Sep 1, 2017 at 3:59am PDT

This looks like it’s an advertisement for U-Haul, but it’s just #AllstonChristmas pic.twitter.com/OShCrtryMc

Ted went on a bender and didn’t resign the lease. #allstonchristmas

Peak Allston Christmas: just had to get off the train in the middle of Comm Ave because a Uhaul got stuck on the tracks 😐😐😐😐😐😐😐 pic.twitter.com/gRSmePC4ZE

Gonna remember this #AllstonChristmas as the one when I saw a shirtless dude riding a bicycle while playing a flute.

A few local celebrities stopped by to help celebrate

@ladygaga Hi since you’re coming to Boston today I think you should put together at least one concert outfit from #AllstonChristmas finds.

Santa is abandoned in a bucket on #AllstonChristmas

Residents and companies alike celebrated in their own ways

allston! i’m not moving but i contributed to #AllstonChristmas this year w/ a snapchat filter! use it & show me 😊 (cc @allstonratcity) pic.twitter.com/6clnqJ0fdU

Hope everyone is having a good Allston Christmas. We’re over here celebrating Jamaica Plain Easter.

And some are just over it!

This Allston Christmas Olympia Moving & Storage was honored by a visit from Boston Magazine, who rode along with our crew this morning to see what the “holiday” is like through the eyes of movers.

Whether you’re moving next Allston Christmas or any other day of the year, give Boston moving company Olympia Moving & Storage a call at 800-222-4744 or request an estimate online.