The 2015 Dulles  Plane Pull on Saturday was the biggest Plane Pull yet in terms of fundraising, plane pull teams, and attendance. The event raised hundreds of thousands of dollars for Special Olympics Virginia athletes and 71 teams participated. For the first time, the event featured two planes being pulled!

For the first time, Olympia Moving ran an “Are You As Strong As An Olympia Mover?” fundraising game. Hundreds of athletes, kids, moms, dads, and even monks tried to hit the bell on the high striker to prove their strength.

Of course, the Olympia Moving crew was also eager to prove their strength and fundraised to pull the 82 ton airplane.  The crew pulled the plane 10 feet in 6.194 seconds – our best time yet!

Thank you to the generous partners to Olympia Moving & Storage who donated to our plane pull team!  All the money we raised will provide free sports training and competitions for athletes with intellectual disabilities:

To see team Olympia Moving & Storage pull the plane and all the other plane pull excitement, be sure to check out this video.  We look forward to sponsoring Dulled Plane Pull again next year!

Visit olympiamoving.com/specialolympics to learn more about our ongoing work and charitable partnership with Special Olympics.

During the week leading up to the Plane Pull, Olympia Moving has been busy receiving event supplies, managing pick ups and deliveries of event equipment, and assisting with set up and break down. All these services are donated free of charge to Special Olympics Virginia. This year, the moving company will be running a fundraising game “Are You Stronger Than an Olympia Mover?” Event attendees and children will have the chance to hit the bell on a high striker and win a prize. All proceeds from the game will benefit Special Olympics Virginia.

The Olympia Moving crew will also be participating in the Plane Pull and will pull a 164,000+ pound Airbus 12 feet in support of athletes with intellectual disabilities. The crew will be looking to beat last year’s pull time of 7.01 seconds. Olympia Moving & Storage has been fundraising for the Plane Pull over the past month, and would like to thank their following partners for their generous donations to their campaign:

The Olympia Moving crew has even been pulling their trucks in their yard to practice for pulling the plane!

The Dulles Day Plane Pull is a popular event for Northern Virginia families and continues to grow.  Last year over 30,000 people attend the Plane Pull, and for the first time the 2015 Plane Pull will feature 2 planes for teams to attempt pulling!

It’s not too late to donate to team Olympia Moving! Click here to donate and fund competitions, sports training, and health programs for athletes with intellectual disabilities.

They carry sofas and pianos all day long, but on September 20th the Olympia Moving & Storage crew will prove that they’re the strongest around – and raise money for a terrific cause.

Olympia placed 9th out of 66 teams last year. This year, we are in it to win it! Check out the video of our 2013 Plane Pull

We would greatly appreciate your help raising money to provide programs for athletes with intellectual disabilities.

Plane Pull is also a great family event; and includes car shows, aircraft displays and a kids zone. Come see Team Olympia pull the plane: Saturday, September 20th, 11 AM – 4 PM, Dulles Airport. In addition to our fundraising, we are also donating logistics support for the event and exhibiting one of our trucks.

Every donation helps! Thank you for your support of Special Olympics Virginia!

As part of our ongoing support and sponsorship, our Virginia moving crew pitched in over the weekend for the Dulles Plane Pull to benefit Special Olympics Virginia!

Olympia was proud to be the official logistics sponsor of the event. During the prior week, Olympia managed pickups and deliveries for the Plane Pull’s supplies. Our crew also helped the SOVA team with set up, and provided day-of logistics support.

Ellen Head, director of development with Special Olympics Virginia, had the following to say about the crew: “THANK YOU ALL SO MUCH! Your team was so helpful in so many ways and made such a positive impact on the event. All of your staff that were sent to assist or deliver throughout the week were always punctual, professional and so helpful. If I could throw you all in one big group hug, I would! THANK YOU!”

At our event sponsor booth, kids had fun exploring the inside of one of our moving trucks. 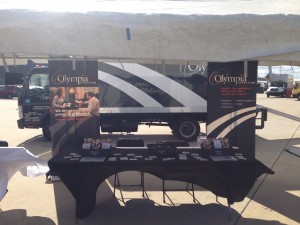 Team Olympia also participated in the Plane Pull. Our crew was able to pull a 164K lbs airplane in 6.791 seconds, earning them 9th place out of the 66 participating teams! If our crew can move a plane that fast, imagine how fast they can move a home!

Best of all, the event raised more than $226K for the Special Olympics athletes! The money will be used to provide year-round sports training and athletic competitions for athletes with intellectual disabilities. Olympia is proud to donate money and our services to such a worthy cause.

You can learn more about Olympia’s ongoing sponsorship of Special Olympics at olympiamoving.com/specialolympics